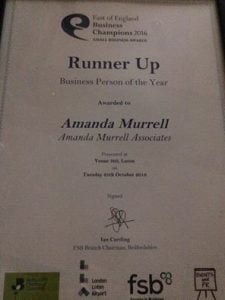 We are delighted to announce that Amanda Murrell was awarded Runner Up in the Business Person of the Year award at the East of England Business Champions Awards 2016 on 25th October.

Having been successful in reaching the final, she batted off stiff competition from the 7 other finalists to take runner up, coming second to Nicola Weeks of George James Bridal, who was also crowned overall Champion on the afternoon.

Amanda, who has previously been awarded Bedfordshire Business Woman of the Year at another prestigious awards ceremony, said “I was completely taken aback when they announced my name. The other finalists were all so strong and I didn’t think I had a chance. I am so grateful to everyone who has supported me this year and look forward to the next 12 months working together.”

We are absolutely thrilled for Amanda and for Amanda Murrell Associates in what has been another very successful year!

This site uses Akismet to reduce spam. Learn how your comment data is processed.